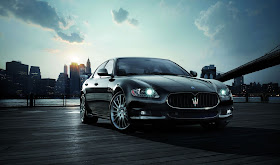 Liu, 44, bought a gray Porsche AG 911 Carrera S two years ago for 1.2 million yuan ($182,000) and is shopping for an Aston Martin, the sports car made famous by James Bond movies. The construction company president said she is “quite proud” of being the center of attention when she motors around the city.

“Fast cars have always been a man’s world,” Liu said. “Women buying such cars are just seeking an equal standing with our male counterparts.”

A third of China’s millionaires are women, and they buy a disproportionately large share of high-performance sports cars in the world’s fastest-growing major economy. Fiat SpA said the percentage of women buying its Maseratis in China is triple that of Europe, while the percentage buying its Ferraris is double the global average.

The number of Chinese millionaires grew 6.1 percent last year to 875,000, according to the Shanghai-based Hurun Research Institute, as the economy expanded by 9.6 percent in the third quarter.

The nation has 11 of the world’s 20 richest self-made women. Cheung Yan, founder and chairwoman of Nine Dragons Paper Holdings Ltd., is No. 1 with an estimated fortune of $5.6 billion, Hurun said.

Sarah Yao, 36, is shopping for another luxury car to add to her collection of nine, including two Maseratis and a Fiat 500. She said she once flew to Italy to learn how to drive a Maserati.

“Nowadays, women do a lot of men’s jobs,” said Yao, co- owner of the Castle Hotel in the coastal city of Qingdao. “We work very hard and need something to reward ourselves.”

Mainland sales for Maserati, whose parent is based in Turin, Italy, increased 50 percent last year to 400, putting China on course to surpass Italy this year as its second-largest market, said Christian Gobber, China managing director.

The marque is catering to women by adding colors such as red and Bordeaux.

“This is a society that has traditionally empowered women” in business, Gobber said. “It’s easy to see women in very powerful positions and running important businesses.”

Yao bought herself a Spyder for her 31st birthday and added a GranTurismo in 2008.

The Maranello, Italy-based carmaker will increase its mainland dealerships to 15 this year from 11, focusing on cities outside Shanghai and Beijing, said Edwin Fenech, president of Ferrari’s Asia Pacific, Middle East and Africa division.

The company expects a “huge increase” in sales as wealthy Chinese dispense with chauffeurs and start driving themselves, he said.

“China is a market where people who have money do not drive,” Fenech said. “You have to wait for the people to come from the back seats to the front seats.”

Parent company Fiat is up about 16 percent in Milan trading this year after rising 51 percent in 2010.

Sales by Volkswagen AG’s Automobili Lamborghini SpA division tripled in China last year to 247 from a year earlier, according to the company. Inquiries by women at a Hangzhou dealership increased 50 percent in 2010, and the southeast China showroom had its first female buyer, said Zhang Jie, a saleswoman.

Volkswagen, based in Wolfsburg, Germany, may start selling Bugatti sports cars on the mainland this year, said Soh Weiming, its China executive president. The preferred shares in the company, which also owns Bentley, are up about 5 percent this year in Frankfurt and have doubled in 12 months.

“We think that China is going to become the biggest luxury market in the world,” Beijing-based Soh said.

Buyers of ultra-luxury cars pay more than double the U.S. sticker price because of additional duties. Those include a customs tariff of 25 percent and a tax on engine size that can reach 40 percent for a Maserati GranTurismo.

To develop its nascent automobile industry, China mandated in 1994 that foreign companies form joint ventures with Chinese partners for local assembly. Foreign automakers may include all the deliveries in their financial reports yet only half the profits.

Since ultra-luxury brands are typically assembled overseas and imported, automakers keep all the profits.

“I like the feeling of driving fast,” said Liu, who is shopping for an Aston Martin. “Driving a sports car is still something people envy very much.”